HVLS Fan is known as Helicopter fan. But did you have a question in your mind that why?

In this blog, we will answer your question. & Make things clear about HVLS fans & Helicopter Fans.

Let first clear how a Helicopter fly? Helicopters use the same principles of aerodynamics and physics to achieve the necessary lift as fixed-wing aircraft.

Helicopter rotors rotate so fast that they are actually wing-like “discs.” This technology is basically the same as the principle of high volume low speed (HVLS) fans.

The difference between the helicopter and the HVLS fans is that the blades on the fan are made to push air through a building versus lift an aircraft off the ground.

When comparing the HVLS blades to helicopter blades it is important to note two things: blade speed and purpose. Let’s Breakdown full form of HVLS Fans to better understand.

Like a helicopter rotor blade, the HVLS fans blade moves a lot of air.

This is powerful enough to cool and control the air in large industrial premises such as airplane/helicopter hangars, automobile industry, or production or distribution facilities.

These fans move slowly and distribute large amounts of air at a low rotational speed.

This is the main reason why HVLS fans are not creating excessive vibrations and shakes.

This allows the fan to push large quantities of air throughout large rooms or buildings with very little disturbance.

While the purpose of the blade action is for air temperature and environmental control, it works just like helicopter rotors.

To learn more about which ventilation system (fans, cooler) would work best for your premises, you can just drop your contact details, We’ll get back to you soon. 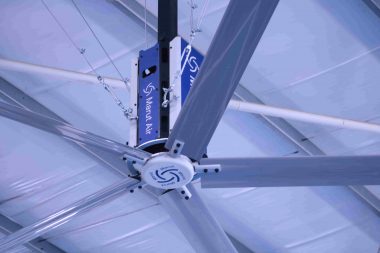 Why HVLS fan is needed? 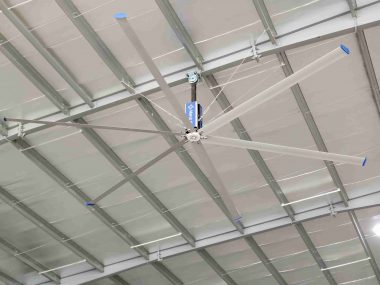 WHAT IS HVLS FAN?? 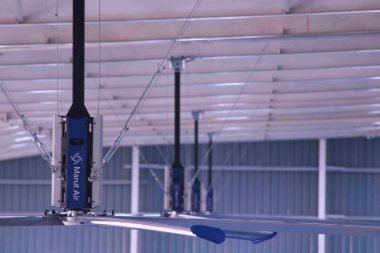